Schwingen, one of Switzerland’s oldest and most popular sports is coming to Zug on the weekend of the 23-25 August.

This will be no ordinary summer weekend in Zug as 300,000 people descend onto quiet little Zug to get a view of this remarkable and unusual sport. Schwingen is the traditional heartbeat of Swiss sport and culture.  So, what is Schwingen? The easiest comparison to make is its similarity to various forms of wrestling. The Eidgenössisches Schwing- und Älplerfest ESAF is Switzerland’s largest sports event by far and could fill out London’s Wembley Stadium three times over and still there would be people trying to get in.

The Origins of Schwingen
Schwingen dates back to medieval times and it’s popularity is as strong as ever thanks largely to the 2010 winner, Kilian Wenger, so explains Brigitte Hefti, whose partner Rolf takes an active part in Schwingen competitions.

“Since 2000, the popularity of the sport has soared. When Wenger won in 2010, Schwingen became more saleable to the public and sponsors came onboard.”

Today, the sport of Schwingen can now boast the building of the largest temporary stadium in the world, which is currently taking place on the outskirts of Zug. Over a three-month period, a 56,000-seat arena will be put together including 300,000 individual parts. And once the weekend’s festivities are done, the arena will take three more weeks to dismantle. The ‘Only’ King of Switzerland
The Federal Wrestling and Alpine Games Festival are hosted every three years by one of the five regions. Alpine culture and traditional Swiss music is also celebrated with sports like Hornussen on display. The numbers are extraordinary for an amateur-sporting event as Hefti points out. 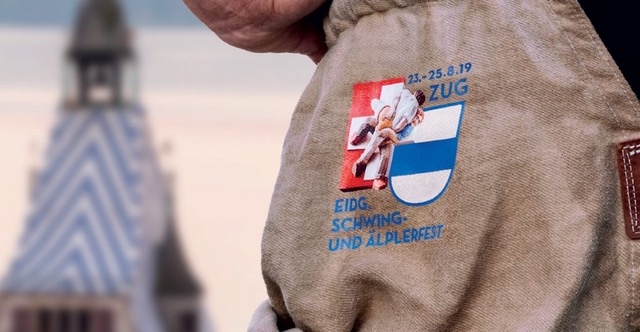 Schwingen isn’t just about raw power. Technique and agility is just as important as Hefti explains.

“You have to be in good condition and you need flexibility, power and technique.”

The competition lasts from Friday through to the Sunday and consists of eight rounds of wrestling.  Every participant goes through the same rounds and the schwingerkönig is the King (the only King in Switzerland and winner). Hefti explains the prizes.

“The winner receives a bull, which is typically valued at CHF 15,000.”

There is no money but prizes vary from a cowbell to an oven from the Gabentempel – a temple of gifts. Every competitor gets a prize.

Foreigners and women to be introduced in the future?
The organizing committee has a budget of CHF 32 million to make the event a success. With record numbers and sponsors from John Deere to Zuger Kantonalbank, questions are now being posed about where the sport can go.  Whisper it quietly about women’s Schwingen for example. Schwingen is a very male-dominated sport, a no-go area at the festival. Women are taking up Schwingen at a rapid rate and there are now cardboard cutouts of the 2018 Champion, Sonia Kälin, to go alongside the male contenders in Zug’s shop windows.

Times are a changing within Schwingen and just may be in 2022 (Basel - NWSV) we may find a foreigner contending (the Americans are competing) and the ladies taking part?

5 easy ways to show the environment some love