The party was a great success. Watch this space for the update on the amount that was raised last Saturday. We will be getting the numbers soon.

Andaleeb Lilley and Stutee Parmar are no strangers to combining their talents to create events that entertain and bring change. The Burlesque Evening is the third charity event that the two have organized together, with very positive results.

"It all started at the end of 2016 when so many pop stars from my era passed away (George Michael, David Bowie, Prince, to name but a few). I came up with the idea to organise an 80s night in Zug and wanted it to be a charity benefit. I asked Stutee for support and with our different skillsets we complimented each other, "said Andaleeb.

In their first event in 2017 the dynamic duo supported Save the Children. They were delighted to have several members from the charity's Zurich office, including CEO Oemer Gueven, speak on how the funds would support 570 children in a refugee camp for a month. Along with ticket sales and a raffle of prizes donated by companies in Zug and London, they raised a total CHF 14,465 from the 80s night in Zug.

"In 2018 we supported CARE and once again, someone from the charity came along to talk about the work we were supporting. Director Julia Kent from CARE came along to give an emotional talk on the impact the funds would have. This time, 40 low-income Jordanian and Syrian women were supported by the purchase of sewing machines and materials so that they in turn could financially support their families by starting up their own businesses," Andaleeb said. This time, CHF 15,000 was raised.

"Each time we have picked a charity for different reasons - either we have a specific link to a charity or we feel strongly about the cause we are supporting.  It was very clear for us that with the current refugee crisis, we wanted to support children and families which we did for the first two years." 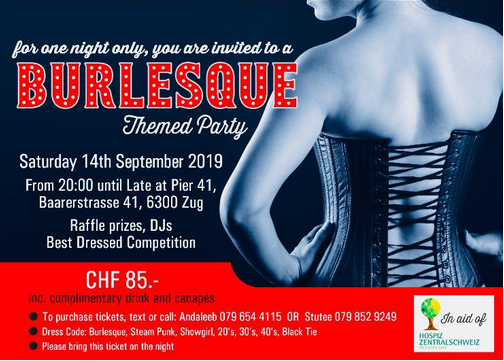 For the latest event, they have decided to support Hospiz Zentralschweiz. Andaleeb's motives were a bit more personal this time around. "This year, we wanted a Swiss charity to benefit and as my father passed away from cancer last year, and I have seen first-hand how important end-of-life care is, we decided to support palliative care in particular." Almost everyone has been affected by cancer in some way sadly, so we knew that people would be able to relate and find it a worthwhile charity to donate to." she explained.

It was also a plus that  ZUG4YOU founder, Natalie Albrecht and Andaleeb have been friends for many years. Natalie suggested they support Hospiz Central Schweiz as she personally considers the project very meaningful and worthwhile. Once Andaleeb and Stutee saw what the hospice intends to provide in its Luzern location, it was an obvious choice.

The charity organizers are a natural fit to make this event a successful one. Stutee has a background in hotel management and event planning and Andaleeb has a background in fundraising, event planning and photography and has also worked in the corporate and voluntary sector too. Both women are mothers, have similar backgrounds, a strong connection to Zug and have lived in Switzerland for over 33 years combined.

The idea of a Burlesque evening was picked for its fun theme, following previous themes of an 80's night and a Masquerade Ball. They are ambitious about this year's event and hope to raise between CHF 12,000 and 15,000. It's a lot of planning and work, but as Andaleeb mentioned, "We have a team of volunteers who have helped us since the first event which we are very grateful for! We also receive generous sponsorship and a very good deal from Pier 41 in Zug. Thank you too to all the vendors who give us great deals, complimentary prizes for the raffle and to all those who donate too."

If you would like to know more about contributing or attending, contact Andaleeb (079 654 41 15) or Stutee (079 852 92 49) directly. They are also looking for sponsorship for certain things in order to provide even more to the beneficiary charity and donations are always very welcome.

Back2Work - Getting back into the labour market, 28 March