We've compiled some information and resources that can help you continue to get settled. These are all practical tips, useful links and what you need to know to make life in your new home Zug as smooth as possible.

In case of a medical emergency (Notfall), quick medical care is essential and lifesaving. The Emergency Center (Notfallzentrum) of the Zuger Kantonsspital is fully equipped and offers services on a 24/7 basis. We recommend that you have the hospital address programmed into your phone or GPS to avoid panic situations if an emergency should arise.

Experienced and trained staff will gladly answer any questions and coordinate any emergency doctor appointments with family doctors as well as specialists such as pediatricians, gynecologists, psychiatrists, etc. It is generally advised to seek out a General Practitioner ahead of time, as they refer patients to specialists. Not all doctors take new patients. For a list of all foreign language health services, click here.

For non-emergency medical assistance or for consulting about over the counter medications and health information, the local pharmacies are all very helpful. They can provide flu shots and other immunizations, sell herbal remedies and also rent out medical equipment such as respirators and vaporizers.

Since 50 years, the Fachstelle Migration is the professional point of contact for the migrant employee population in canton Zug. They work closely together with the authorities and migrant organisations of Zug. The team is characterised by its numerous cross-cultural competencies and works on behalf of the canton and its municipalities. They are politically and religiously independent.

Under the headline New in Zug, the FMZ also provides an array of programs and courses that can help you get even more settled and feeling like a local in no time. The Zug host programme offers the opportunity to meet with locals while getting to know the area as newcomers are paired with hosts.

The Welcome Desk is here to answer all your questions. Drop-in for a visit, call or email them.

Please note that this information is generic and we remind you to consult businesses individually for their exact opening hours. Shops, post offices and businesses have different opening times according to their size and location.

Shops at Zug's main train station are open 365 days a year until at least 20.00 h - these include a grocery store, flower shop, beauty salon/barber, pharmacy, kiosk and some restaurants.

There is a special day pass (Tageskarte) that residents can purchase from their corresponding municipality to travel across all modes of public transportation throughout Switzerland for just CHF 44. As there are a limited number of cards on any given day, it's important to reserve these well in advance.

What does the Tageskarte do for you?

You can utilize the day pass on all SBB and Post routes as well as across most private operators and ferries, analogous to the usual general subscription of SBB. A possible change of class (from 2nd to 1st class) can be purchased for any route or at a daily flat rate at any SBB counter or in the train.

How do you reserve the Tageskarte?

You can see the amount of cards available in Zug and reserve your Tageskarte here. For other municipalities, please see www.tageskarte-gemeinde.ch/en-us/.

Day passes can also be reserved and picked up directly at the reception desk of your municipality.

Please note the special opening hours over Christmas, New Year and other holidays.

You must pick up the day ticket within 7 days of your reservation and pay in cash or by debit card. Day passes will not be sent by post. Reserved but not collected day passes will still be charged. Day passes cannot be returned or refunded, even if unused.

Among things to get used to when moving to Switzerland is navigating new grocery stores with odd items on shelves you haven't seen before. Managing to get your favourite roast or cut of meat that you so easily find back home can also be quite the challenge. Luckily for you, we came upon a brilliant blog that takes all the guesswork out of this process. So much so that you'll be ordering meats at your neighborhood butcher like a pro. We'd like to thank Andie Pilot and her Helvetic Kitchen blog, complete with extensive explanations and fetching illustrations.


Every country butchers its animals slightly differently. As I am always confused about the cuts and what they are called, I attempted to educate myself. So, I did some extensive googling and read a book about Swiss meats (see resources below). Now please accept my best renderings of the Swiss, US, and UK cuts of beef. (Not every single cut is directly translated, because unless you have a native butcher, you won't necessarily find the cuts you would find at home. 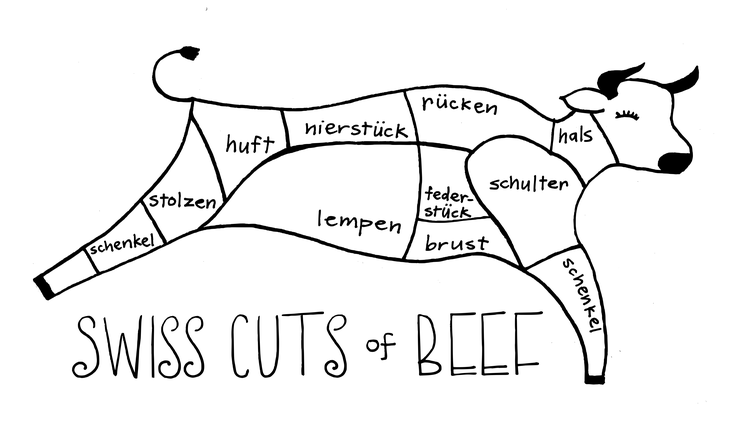 The front half of the cow is normally meat that becomes its best self after a longer cooking time and some tender loving care.

In Switzerland, they often use the Brust and Federstück as boiling meats, called siedfleisch (I've seen this called boiling beef in English). Federstück is typically the meat you would use for Siedfleischsalat. If you're looking to make brisket, pho, corned beef or pastrami, these are the cuts for you.

The Swiss often use this part of the cow for stews and soups, but in the US one part is the quick frying flank steak (skirt steak in the UK) and the rest is normally ground.

The muscly and lean neck meat is typically ground into chuck in the US/UK or used for flat iron steaks. This might be also used for stews, soups, or braising.

Schulter—Thick Rib (UK)—Chuck (US)
The shoulder of the cow is split into three cuts:

Schulterfilet: this can be used for Steak Tartare and steaks, as well as stews

Schulterspitz: would be used for pulled beef and flat iron steaks

Dicke Schulter:  is stew and braise-worthy, as well as having the right kind of beefy flavour for dried charcuterie and ground beef 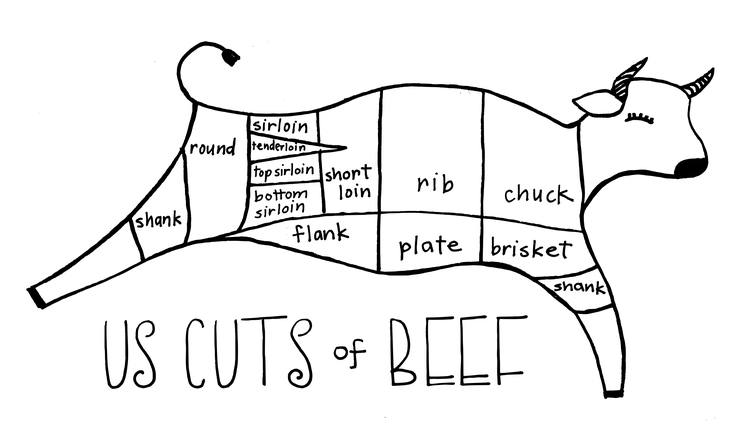 Rücken—Fore Rib/Chuck and Blade (UK)—Rib (US) The back of the cow is split into two parts:

Hohrückendeckel: is lean and used for stews and braising

The back half of the cow normally has the tenderest and most sought after cuts of meat.

The best and most expensive part of the cow—in Switzerland, it's split into two:

Filet: which gives the tenderest steaks (Filet Mignon), Chateaubriand, Beef Wellington, and the meat for Tournedos and Stroganoff
Entrecôte: your typical roast beef, as well as your T-Bone and Porterhouse steaks.

The hip of the cow provides more meat for stroganoff and Geschnetzeltes, as well as some coveted steaks. It is also split into pieces:

Breite Huft: is used for Fondue Chinoise or Bourguignonne

Schmale Huft: is also used for fondues, as well as rump and sirloin steaks

Tafelspitz: is itself a famous Viennese dish, but can also be used for steak and braising 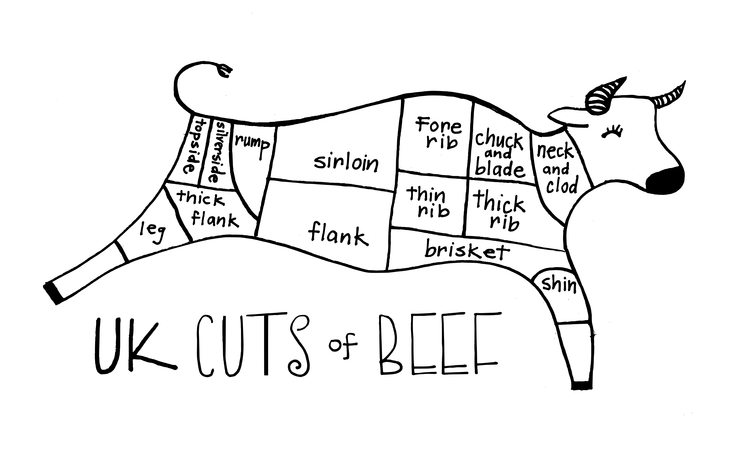 The Stotzen is split into a number of parts:

Eckstück: used for Geschnetzeltes, roasts, Fondue Chinoise and Bourguignon, Schnitzel, and Steaks. It is also often used to make dried meats such as Bünderfleisch.

Unterspalte: stews and roasts, Saftplätzli, which are braised steaks, and Sauerbraten/Suure Mocke a marinated pot roast

And finally, here is one I spotted at the Coop, and had no idea what it was—the Aitchbone. Apparently it makes an excellent roast.

Huftdeckel—Aitchbone, this is an old-fashioned cut, near the rump, a roasting joint.

Some vocabulary that you might encounter when buying meat in Switzerland.

Meat marked as Ragout/Voressen/Gulasch, is cut from different parts of the cow and typically denotes stewing meat in Switzerland.

The word Geschnetzeltes simply refers to how the meat is cut, in strips. In Switzerland this is often used to make the beloved Züri Geschnätzlets, and is often cut from a tender part of the hip or flank.

Brät is a processed meat, like forcemeat in the UK, which is used to make Brätkügeli, among other things.

Broadly, one tends to know that there are 26 cantons across Switzerland (each with a distinct flag, of course) or that Switzerland has 4 official languages as well as 13 UNESCO World Heritage Sites and a stable economy. What about all the nitty-gritty details though? Thanks to the publication Switzerland in Figures by our partner UBS, you can dive right in and explore over 2,000 brilliant facts about the Swiss economy.

Things to Do This October Break